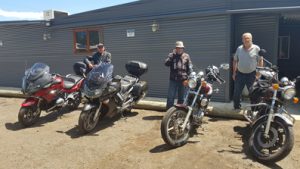 Alan, Jim and Vic at the Tractor 828 Cafe

Vic phoned me last week and asked if I would like to join him and a few other club members for a ride to Ebenezer on Friday.  “Meet at the Parkleigh Hungry Jack’s – 10:am” he says.

I found out.  Jim and Alan joined with Vic and me after the rendezvous at Hungry Jack’s.  Vic arrived on his Yamaha XS 650, Alan on his brand new BMW and Jim on his trusty Yamaha Virago.  I was riding my Yamaha FJR (feeling slightly guilty about having left the BSA Lightning languishing back in the garage).  We took a very enjoyable ride out west to Windsor, turning right at Pitt Town Road where the Australian Hotel is located on the corner.

From there we travelled along Cattai Road, Wisemans Ferry Road and through Maroota (I had heard of this place). Turning left, we found Sackville Ferry Road and crossed the Hawkesbury River at Sacksville (by ferry).

Half a kilometre on from the ferry we found the Tractor 828 Cafe on our left (the Cafe is in the heart of Ebenezer, the district) and decided this would be a nice place to stop for lunch and watch the grass grow for a while.  The grass, having grown, was also being rolled up as turf by a turf cutting machine as we watched.

An hour later and we were on our way again, with the fine weather beginning to warm up considerably. We pointed our trusty steeds towards Windsor for the return journey.

At 130 Km round trip it was altogether a thoroughly enjoyable outing.  The Hills Shire in the Hawkesbury  region has some stunning scenery to be enjoyed on such a fantastic spring day.

This ride was so enjoyable that I repeated it a few days later with my partner Ruth on the back as pillion with me!

The place to set off from was Asquith, the sun was out Jim F was the first to arrive but his Yamaha was misbehaving and he did not relish the idea of continuing with us to Gloucester,  Mark Westfield arrived at 11am so we set out I rode my daughters Kawasaki VN250 Cruiser, Allan Mc rode his new BMW 1200RT, we set a fast pace and arrived at Wards River on Buckets way about 2 hours later, Mark W was not with us. I mentioned we might stop in Booral but the sky was a bit black and we continued but he decided to stop for coffee        Finally he caught up to us and said that I was riding too fast.

Arrived   at Ron”s place, Neil P was there he rode from Belmore River which is near Kempsey.  We stayed the night and next morning set out early to Tamworth and Manilla.  Ron was riding his VFR 800  and lead the way  over the mountains to Tamworth we refueled  and had lunch then set off to Manilla the countryside was much drier  creeks with no water in them.

Stopped in Manilla for liquid refreshments then continued on the road to Boggabri and eventually to the farm of Trevor B who is also a BSA club member .Overnight at his  drought affected farm he was selling his cattle as it was no longer affordable to feed them.  At this stage Ron and Neil decided to return home Mark also mentioned that a pressing work problem had come up and he would also return home.

Allan and I decided to continue on to Moree, we all  rode to Manilla.  Here Ron Neil and Mark returned to Tamworth Allan and I went to Barraba then Bingara and on to Moree.  Two days of swimming in the hot water and summer like temperatures was a godsend .

Left there for Walgett. The countryside was worse looking dry no green except for the  trees which dotted the landscape, not much traffic out here.  Passed through Collarenebri not even a shop open, on the outskirts of town was coffee caravan which we stopped at for a rest.

Onwards to Walgett been drought affected for 4 years so pretty dry. the Barwon river was a dirty green colour this was the town water supply. Not much to keep us here stayed overnight had a giant county meal then left in the morning for Coonamble, here we encountered strong winds of 70kmh, the white marker posts along the road were fluttering.  In the distance the sky looked black, I had put on my wet weather pants expecting rain but it was a dust storm passed through Gilgandra and got to Dubbo early afternoon.

Jim F had booked a motel room for us.  Had a rest then rode into town centre did some food shopping and back to the motel, it rained in the night.

Next morning left for Bathurst at 8am got to Orange which we bypassed and arrived in Bathurst 1 0.15am had a late breakfast and set off for the last 200km home.  At Lithgow we encountered a little drizzle and that kept up till Lawson. Allan and I parted company and rode home.

A great time was had by all that attended  I rode a total of 1717km.

The weekend trip to Cessnock via W ollombi   started at BP Asquith Riders Greg Roper, Jim Fox , Joe  Wursten, Alan Mcananey, Mark Westfield and a friend of his Jeff Buchanan and myself total of seven.  The weather was superb sunny, we decided to ride to Kulnura to see a guy called Frank Zappia that does the servicing of Mark”s  Bsa but he wasn’t at home so we stopped at Jerrys café just up the road for refreshments.  Then it was onto Wollombi for lunch from there to Bellbird Hotel or our overnight stop.  Accommodation was good we had the same rooms as last year $40 per nite including weet bix and coffee but there was no milk or bread should ask for these items the day before. dinner was good rump steak at $10, Mark had a Caesars salad which he said was ordinary but everyone liked the rump.  Afterwards sat inside the pub and talked bullshit until we where the last to leave.  The fireplace kept the place nice and warm.

Sunday morning was a little on the cool side Alan, Jim and myself had to leave by 9am to meet Ron Daruwalla at Dungog and continue to Gloucester.  I lead the way towards Maitland  but after a little while there were no more Maitland signs and it was a bit confusing finally got to the New England Highway and more confusion at a roundabout with about 5 exits took the Lorn and Patterson exit, I recognised the next street we crossed because the BSA Rally was held in Maitland in 2008.  The roads have not changed much from 2008 still potholed and just patched, Dungog was terrible don’t they pay the rates.  Ron was waiting with some of his friends from Gloucester, we had coffee and a chat then departed for Stroud and went to a lookout called Silo Hill which had 2 cannon bought from Bare Island at LaPerouse to defend this area from the Russians.

The purpose of this ride was to see if Gloucester could be a suitable venue for the next BSA rally in 2022,  The roads around Gloucester are certainly suitable, the caravan park can hold  2000 people the showground can also be used for camping lots of motels and cafes a few clubs.

On Monday morning we were going to investigate a longer ride but jim’s Yamaha had second thoughts and didn’t want to start lucky Ron had a battery charger but no Jumper leads, so we drove into town in his new car had some breakfast while the battery was topped up his Yamaha also failed last time we were in Gloucester. He changed the regulator and we set off to Booral and then to Buladelah to go along the Wooton Way but Jim decided not to go in case his bike played up.

We set off for home then the wind started to increase my Triumph was really being blown about and was uncomfortable to ride.  The Hexham bridge over the Hunter was particularly bad and the water below was quite rough,  down the motorway towards Sydney the sky was black but blue in the distance I thought it would be OK but near Wyong some spots on the visor so stopped and put the plastic pants on, the rain tumbled down all those B doubles with lots of wheels really sprayed us with water it was so cold, we stopped at the service centre to warm up, then the rain eased off and stopped. .Alan had left us  as he had further to go to Liverpool, Pennant Hills road was jammed up with trucks so it was slow going, I turned off to go through Epping and Jim continued to the M2 and  home.

It was a great weekend good company nice rides but the roads up there are pretty crook.

The departure was the Twin servos on the M4 at Blacktown Mark W on his newly purchased W650 Kawasaki, Jim F Yamaha, Joe Harley , Alan BMW and me on a triumph street triple.  Wow it was hot, I think 35* The ride was slow a lot of traffic but this is Sydney and you have expect this, people going home to Penrith.  Once we passed Penrith the traffic started to clear our next stop was Wallerawang on the  Castlereagh Highway for petrol.  Next stop was Capertee.

Here we had a break for about half an hour had a country pie must have been at least 3″ thick.  We left there continuing on to Mudgee at a fast pace there were mobile speed cameras hidden off the road but oncoming motorists flashed their lights to warn us.  Finally arrived in Mudgee confused a little with directions to Gulgong. We arrived in Gulgong to be met by Ron D who had ridden from Gloucester.  The motel we stopped at was called the Ten Dollar Town Motel  comfortable and provided a cooked breakfast in the restaurant.

I have a friend who is a farmer in Mudgee, I invited him to dinner at the RSL club and he reciprocated by inviting all of us to his farm for a BBQ the next day.

Mark W led the way because he had a navman, it was approx 160 km round trip on returning it was to the pub accross the road till closing time.

Next Morning after breakfast we set out for Singleton via Bylong, the riding was tough as if in a fog it was smoke from the bushfires in the Wollemi National park finally arrived in Bylong stopped to refuel and a rest.  Got to Singleton at 12.30pm couldn’t find the George Hotel because we had arrived on the Putty Rd and the hotel was in the main street .

The other guys settled in, I couldn’t stay because I was due at an insurance seminar at Olympic Park and if I didn’t  and the right number of riders. attend it would cost me $250.  I left Singleton at 3.30pm rode along the hunter bypass it was so windy, finally turned onto the M1 for Sydney, it started to rain, stopped under an overpass got my wet weather trousers out and put them on, it was hard to get back onto the bike so I wheeled into a drain and got on from the high side of the drain as soon as I rode off the rain stopped.

The remainder of the other riders rode through Cessnock on Monday morning and connected with M1 at Freemans Waterhole, Ron rode north back to Gloucester.

It was a great weekend good company.